In 6-2 vs 5-1 Rotation in Volleyball, Six players are on the court in a 6-2 rotation, and two are setters. This means the setters swap out after every other point, meaning they get a rest between points. In a 5-1 rotation, there is only one setter on the court.

This can be beneficial because the setter can develop a better rapport with the hitters and learn their tendencies. However, it can also be more draining because the setter must constantly be in motion. When a team is 6-2, they usually have two different hitters: an outside hitter and a middle hitter. The outside hitter will stay on the left side of the court, while the middle hitter will stay on the right side.

This allows the hitters to get into a rhythm and helps to make the offense more efficient. However, it also makes the offense more predictable, which is why 6-2 teams will often mix things up by running different types of plays. 5-1 teams don’t have this luxury because they only have one setter.

This can make their offense more difficult to run effectively, making it more unpredictable for opposing teams. Ultimately, it’s up to each team to decide which rotation is best for them based on their personnel and their overall strategy.

What is a 6-2 volleyball rotation?

A 6-2 volleyball Offense is a popular offense used by many teams. It is when you have six hitters (two outsides, two middles, and two right side hitters) and two setters. When they go to the front row, the setters get substituted out, and a right-side hitter replaces them.

This rotation is used because it allows for more offensive options and is less predictable than other rotations. Additionally, it can be very effective against a team that does not have strong attacking players.

However, it is essential to note that this rotation can also be susceptible to getting blocked if the other team has potent blockers. The 6-2 volleyball rotation is a versatile and popular choice for many teams.

Why is it called a 6-2 rotation in volleyball?

In volleyball, the 6-2 rotation gets its name from the number of hitters on the court. There are six hitters and two setters in this configuration. This system allows each player to attack the ball while providing a stable setting platform.

The main benefit of this system is that it allows for a more balanced offensive attack. The 6-2 rotation can be used in indoor and outdoor volleyball. It is typically used when teams try to score points quickly or protect against a strong opposing team. When executed correctly, the 6-2 rotation can be an effective strategy for any volleyball team.

Formation 6-2 is an intermediate formation with 2 setters, but unlike formation 4-2 with a middle blocker, the setter (S1 or S2 – highlighted in blue color) in the back sets the balls. Therefore, the 2nd setter in the front will play as a right side hitter.

In this formation,, it makes sense to include a libero (L – highlighted in red color) to the team. Libero is always optional.

Advantages to the 6-2 Volleyball Rotation

One of the benefits to having a three-player front row is that it allows for more consistent play and makes it easier for your setters to find the hitter they want to target. A few strategic advantages can also be gained by using this rotation.

One is that you can match up your setters and hitters to better exploit any weaknesses in the opposing team’s defense.

Additionally, having three attackers at the net creates more chaos and confusion for the opposing team, leading to mistakes.

Lastly, this rotation allows you to take advantage of any mismatches on the court. If, for example, you have an exceptionally skilled hitter matched up against a weaker defender, you can take advantage of that by setting her up for more opportunities to score. Overall, the 6-2 rotation provides several benefits to help your team gain an edge on the court.

Disadvantages to the 6-2 Volleyball Rotation

The 6-2 rotation in volleyball involves six attackers and two setters on the court. There are some disadvantages to this rotation. One is that the setters can’t attack. This means they are limited in terms of what they can do to contribute to the team’s offense.

Additionally, it’s harder to get in position to set when only two setters are on the court. This can lead to more errors and make it difficult for the team to run its offense smoothly.

Finally, having six attackers can give the opposing team more options when attacking. This can make it difficult for the defense to cover all potential attackers and lead to more points being scored against the team.

What is a 5-1 volleyball rotation?

The 5-1 rotation in volleyball consists of two outside hitters, two middle hitters, and one right-side hitter, with one setter. The setter is not taken out of the game at any point. This offense is popular because it allows for a more excellent distribution of attacking opportunities and sets up the block better.

Additionally, having a dedicated setter can be more consistent with their sets. However, one downside to this offense is that it can be easier for the other team to read your offensive patterns.

Also, see the more advanced formation 5-1 where the right side hitter does not receive serves. Keep in mind that fewer responsibilities mean more dedicated training on specific skill sets.

Advantages of the “5-1 Offense System”:

In volleyball, the “5-1 Offensive System” is a formation in which there is one setter who rotates through all six positions on the court. This system has several advantages. First, it allows for strong connections to be maintained between the setter and all of the other players. This can lead to greater consistency on the court.

Second, the opposite attacker will play both front court and back court, which can help them stay in rhythm. Third, this system provides the opportunity to add multiple front-court and back-court attacks to the team’s offense. Fourth, it allows for specialized roles within position groups.

For example, the setter can focus on setting, while the middle blockers can focus on blocking. Finally, this system provides the opportunity to run a slide attack. Overall, the “5-1 Offensive System” has many advantages that can benefit a team.

Disadvantages of the “5-1 Offensive System”:

The “5-1 Offensive System” has the disadvantage of having the setter block. One drawback is that the setter gets fewer repetitions at blocking, which may lead to the defense suffering.

Another disadvantage is that when the setter is in the front court, the front court outside needs to be more offensive both in and out of the system. This can be tiring for some players and may lead to them not being as effective on defense.

A coach needs to understand how to use the whole squad effectively and explain to each player their role within the team. By doing this, players will know what is expected of them and can play to their strengths. This will ultimately help the team be more successful.

What is a setter?

Lost in the shuffle is the player who makes it all happen: the setter.

What is the difference between a setter and hitter?

But while a setter or almost any other position in any other sport, for that matter is in less danger than a quarterback, it does not take away from their importance and value on the court.

What is the most common offensive system in volleyball? 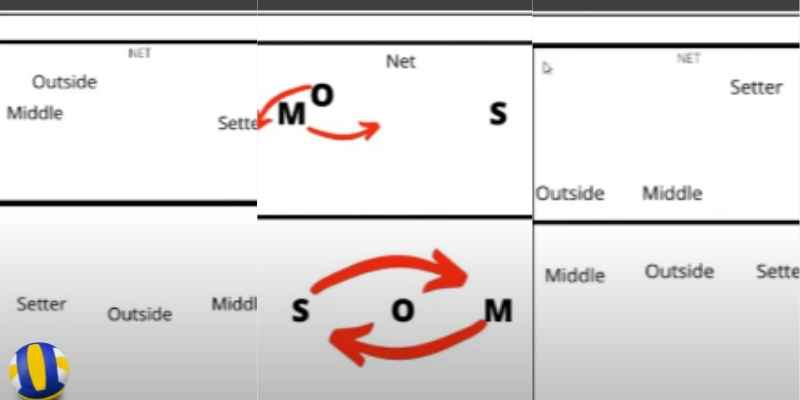